I attended last week’s public meeting regarding a revised re-zoning request being put forth for the Don Black lands. If you missed the first go around back in December 2013, just click here to see what happened then.

This most recent zoning application was a very, very different story from the first. On a side note, I was pleased to see some new faces amongst the crowd in attendance: some people I know but haven’t seen at a meeting before, some people that have recently moved to Kilworth, and others who have chosen to engage at this point.

For reference, here’s the public information packet. I’m hosting it myself since I don’t know how long the municipality will leave it up on their website. This was the information distributed to council and the public prior to the meeting – council only received it on May 22, just five days before the public meeting. 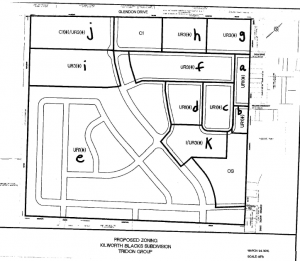 Questions I wrote down during the presentation (answers later):

Answers to my questions:

Later on I got a chance to read a statement I had prepared. It ended up being the final word of the night, though I didn’t intend it to be so. I was asked to cede the floor to others earlier in the night after asking my questions I had written down. The statement went, more or less, as follows:

I have some serious misgivings about the revised proposal being presented here today. Here are a few:

Overall, this proposal simply contains far too much density for the area. I was mostly in favour of the original, but this has taken a drastic turn for the worse. I was happy to defend the original proposal, despite its minor flaws, but I cannot, in good conscience, ask Councillor DeViet to vote in favour of this proposal as it stands before us today.

That got a round of applause, as did many other statements made and questions asked by members of the public throughout the night. Mayor Edmondson had a hard time maintaining order at several points as people got fed up with the answers – and in some cases non-answers provided by Tridon. Needless to say it didn’t go well for Tridon and Don Black, and we hope the next version of the zoning application is very different. Whether the planner, Ben Puzanov, mandates another public meeting for the next iteration remains to be seen.